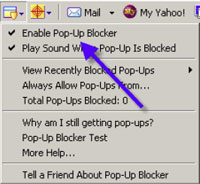 Several websites rely on the ever-so-annoying popup window. As much as well all hate popup windows, some websites do benefit and justly require them. The problem is that some people have their popup blocker on but don't know it -- thus the new window doesn't open. Of course the browser notifies the user but it isn't always as obvious as it should be. Here's a quick method for testing if your popup window is being blocked.

The first step is to give the directive to open a new window, saving what's returned. Then we check to see if the object exists. If it does, we're good. If it doesn't, we give an alert to the user that their popup blocker may be on. The specific text warning can be set to whatever you'd like, as could the method of giving them the message. You could also use a sexy MooTools slider to show the message.