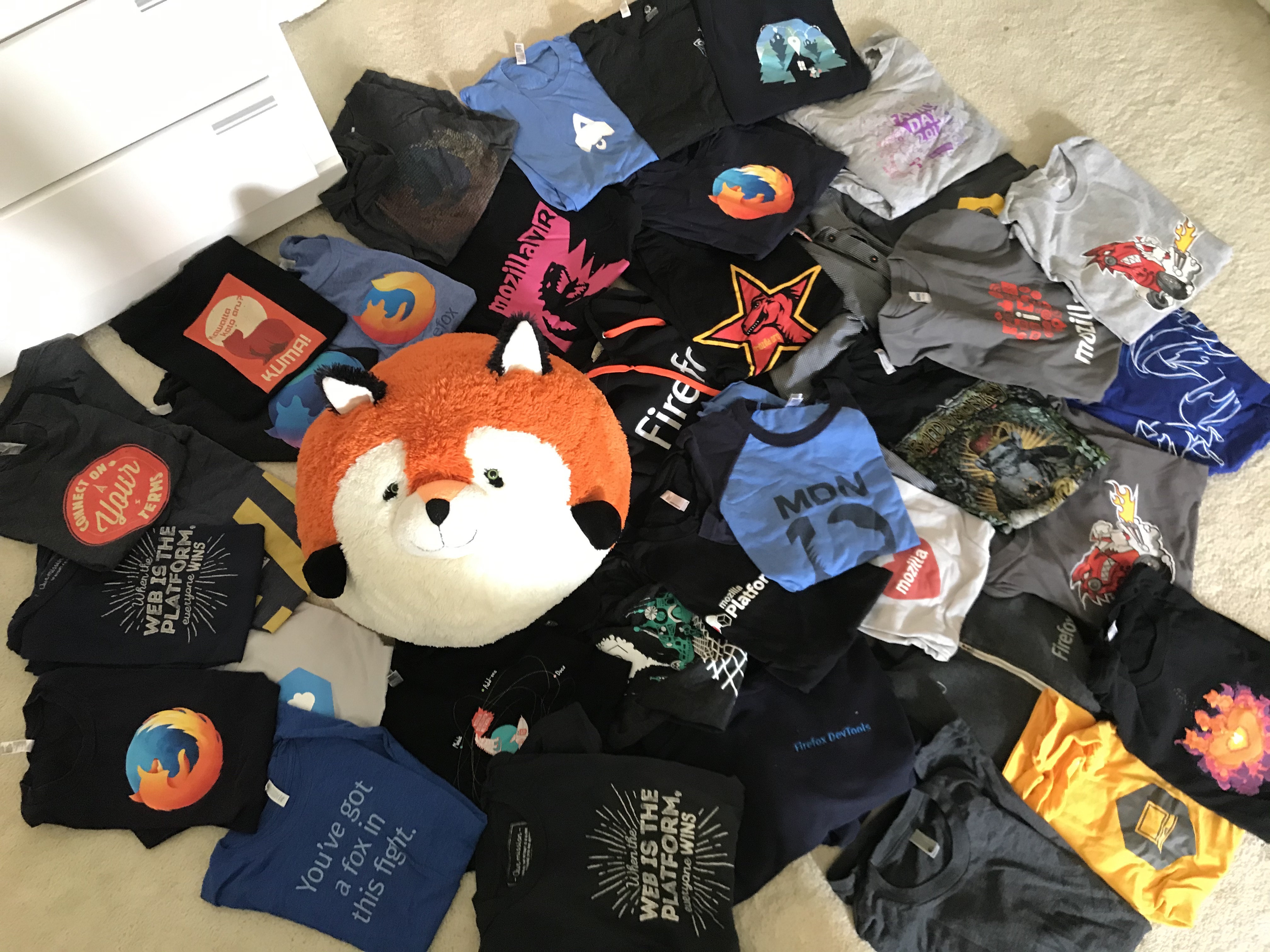 In 2001 I had just graduated from a small town high school and headed off to a small town college. I found myself in the quaint computer lab where the substandard computers featured two browsers: Internet Explorer and Mozilla. It was this lab where I fell in love with Mozilla -- a browser that gave developers actual tools to solve dev problems.

It took me 7 years to get to Mozilla. I spent 5 years at my first industry job and another two elsewhere before I got to my dream: Mozilla. You need to remember that I didn't grow up in a tech-centric place -- Wisconsin is full of farms, cows, and people dreaming outside of the cornfields. When Mozilla came calling, though...I felt like my career was primed for lift-off.

I joined Mozilla as a member of the Web Development team -- my focus was the Mozilla Developer Network. Talk about a dream, my second week at Mozilla was a trip to Santa Cruz with an ocean-side view; this picture was my first at Mozilla:

I had an amazing week meeting my new colleagues. We held a Firefox OS hackathon and my Instagram clone won first prize. My eyes were opened to the world of big tech, Mozilla, and world class engineers.

I had my hands in everything I could at Mozilla. During my time on MDN, I also contributed to Firefox OS, the early WebVR team, the Mozilla Marketplace, X-Tag (web components)...just about anything I could dream of. I wanted a piece of EVERYTHING. I slept each night knowing that I buried my colleagues in pull requests -- I was a machine. I wanted to embody Mozilla...I lived it. One early highlight was befriending Christian and Brendan:

After leaving MDN, I took on a dual role: WADI (Web Advocacy & Developer Initiative) and Firefox OS for TV Partner Engineering. With WADI I had the pleasure of contributing to the Service Worker Cookbook. With the TV role I got a beautiful 60" ultra HD TV where I helped partners bring their video sites and games to life.

When things got a bit tough at Mozilla, I shifted to Mozilla's "Productivity Tools" team. My first two weeks were nothing short of hilarious; my new manager didn't know I was a front-end engineer, so I stumbled through completing a big python migration. It was a look into the future -- me being put into tough spots and fighting through to succeed. And I did.

When it was decided that we'd move to Phabricator for Mozilla's code review tool, I reluctantly started writing the auth code to integrate with Bugzilla. I reacquainted myself with PHP, I stepped back in time to learn perl, and made it happen. I felt low during this time, but looking back, most every patch that goes into Firefox has my fingerprints on it; it was a massive personal achievement.

DevTools are what made me fall in love with Mozilla. My aspiration, my dream was to get to Mozilla but reaching the Developer Tools team made everything come full circle. I became what I fell in love with.

DevTools was amazing. I was part of a team I'll remember the rest of my career. I learned a ton. I implemented some amazing features in the debugger, including a Breakpoints pane rewrite, creating the Event Listener Breakpoints and DOM Mutation Breakpoints panes, as well as hundreds of other patches. I mentored Google Summer of Code, Outreachy, and UCOSP students, as well as guiding an amazingly talented contributor community. Despite enjoying my time with DevTools and its contributors, I knew my time was coming to an end.

As my Mozilla enthusiasm waned, I was loaned to the Firefox for Android team where I met new challenges; even better, I met an amazing team of young engineers fighting through changing requirements and negative perceptions. I absolutely loved it. Would I have passed an interview for that job? Hell no. Did I succeed in the end? Hell yes. I was a contributor to a major Firefox for Android feature -- the tab tray, something every user will see dozens of times per day.

The entirety of 2020 at Mozilla was thick with apathy and an impending knowledge that layoffs were coming. We all knew it. I spent many nights pondering with my wife if I wanted to be on that list. When the hammer finally came down, and I was under it, I felt more relief than anything.

I've pondered for a month why I didn't feel more hurt and the truth that I came to was...I did it. I fucking did it. Mozilla was my dream and I lived it. I don't leave with a single regret....not one. I have thousands of lines of code in more projects than I should. And I wasn't laid off for lack of performance; I'd been there a long time, done well while I was there, but COVID and other business factors contributed to 25% of the organization being made redundant.

To the 18 year old David who sat in that lonely computer lab: you fucking did it, dude. You lived that dream.

Note: I didn't mention any individual names or thank you's; not because I'm not appreciative, but because missing a single one would break my heart. You know who you are. Your fingerprint is on my story, I owe you more than you know.