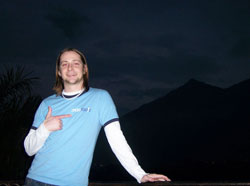 The lightbox is probably one of my favorite parts of the Web 2.0 revolution. No more having to open new windows (which can bog down your computer quite a bit) to see a larger image, video, etc. Instead, the item loads right into the page quickly. During my recent trip to Mexico, I made sure to take a bunch of pictures and videos so I could highlight my favorite MooTools lightbox: mediaboxAdvanced.

Media box is an all-encompassing lightbox that allows you to open images, videos, static content, etc. while being highly customizable. I've taken advantage of mediaboxAdvanced to show you pictures and videos from Monterrey, Mexico.

We read in the thumbnails directory and output its contents. I've placed the settings on top so you can customize this any way you'd like.

Simple CSS to set the size of thumbnail anchors. Set these properties however you'd like. Also note that we must included mediaboxAdvanced's stylesheet.

None. None? Yes, none. mediaboxAdvanced takes care of this for us. You can, however, place your own directives in the page without problems using mediaboxAdvanced's API.

A good lightbox takes care of all circumstances and requires minimum user knowledge (in my opinion). mediaboxAdvanced can only be described as awesome.

For Those Who Care...

A few notes from my trip:

I had a blast and look forward to returning soon!