One of the catch 22's of owning a blog or site on the cheap is that of not breaking the budget, while tip-toeing around an overly constrictive space/bandwidth quota. Along with countless others, I myself am often hanging in the aforementioned balance. One solution I recently deployed to stretch a little more mileage out of my current hosting package was to serve all my static content via one of the many dirt cheap or even free file hosting services out there.

Serving my static content from a remote location has had several benefits, such as reduced bandwidth consumption and fewer content requests. However, I immediately became aware of an inconvenience to this solution. Modifying any static content on my local machine (which I use for development and testing) forces me to change their references to local paths. The same is also true if I want to do any development while disconnected from the internet. And of course, these references must be switched back to point at my static hosting before deployment. I found this to be getting so tedious that I was simply testing in production - bad idea.

Well that's when I thought of this painfully obvious solution - while I'm quite sure it's not original, it is both very simple and very useful. I use a common.php file to hold all of my site-wide helper methods. I added to it this simple function:

Then I organized all of my static content into the following directory structure:

While this does require a little more work up front, it has saved me a lot of time and makes development so much easier. 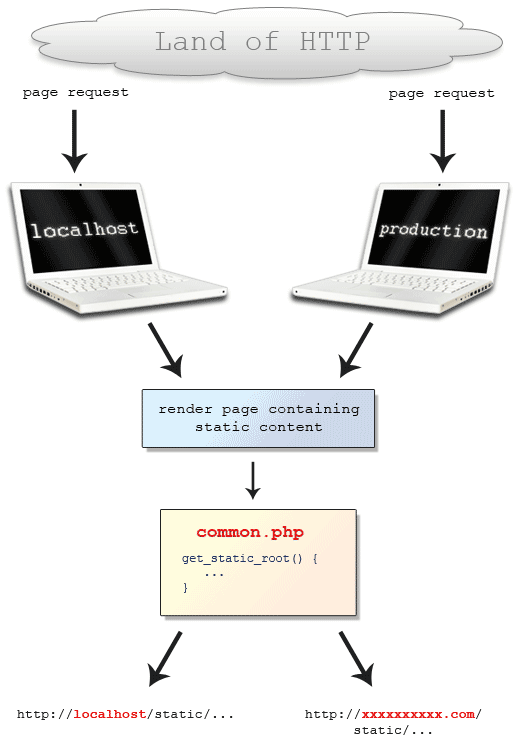 Well that's it! Many thanks to David for letting me guest author on his excellent blog!

Jeremy Martin, born and raised outside of Seattle, Washington, received a B.S. in Computer Science in 2007. In July of the same year, he married his beautiful wife, Annie, and they now reside in the far, far away land of South Carolina. Jeremy is currently a software engineer for Charleston based Benefitfocus, and enjoys hanging out with his better half, and keeping his blog up to date (when she'll let him...).