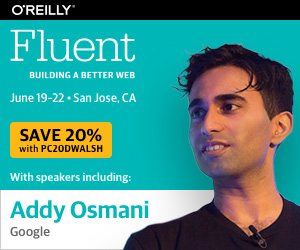 O'Reilly Fluent Conference, taking place in San Jose on June 19-22, is one of the best conferences if you're a front-end developer like myself. Most of the big names I've known over the past decade have graced Fluent's stage, one of them being Kyle Simpson.

I was recently able to interview a Friend of DWB™, Kyle Simpson, who happens to be chair of Fluent Conference, to talk about conferences, Fluent in particular, and what he's been up to!

Kyle has written some amazing JavaScript tutorials on this site, including a series about ES6 Generators, JavaScript Objects, and more!

You've spoken at numerous conferences but you seem to always pop up at O'Reilly events. What do you think makes O'Reilly conferences a must-go experience? 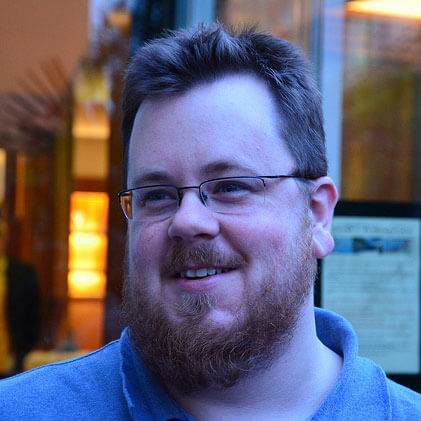 The thing I've always admired about O'Reilly is their commitment to leveraging different media to bring content to developers in a more wholistic and comprehensive way than anyone else. They have videos, books, podcasts, articles, conferences, and more. When I go to an O'Reilly conference, it's an immersive experience that extends and complements what I read in one of their books or watched on a video. And it does so while bringing together the top minds in our field. I couldn't ask for much more from a conference!

The O'Reilly name is synonymous with top-notch web developer content, especially Fluent Conference, and I'm beyond proud to be one of their authors, teachers, speakers, and now serving as co-chair for the conference. Because of their reach and reputation, attendees and bosses and sponsors alike all know that what they'll get out of Fluent Conference is passionate speakers, engaging discussions and community mix, and practical information to help them build a better web.

Thanks to technologies like React, Babel, and the other forward-thinking projects popping up each day, JavaScript is seeing excitement like the early JavaScript framework days. What exciting technologies will we learn more about at Fluent?

We had nearly 600 submissions for talks for this year's event, and nearly every one of them was quality enough we could have put in the schedule. We could put on 4 conferences from this mix! What that really says to me is how much passion and excitement there is in the community these days, and how broad the span of topics has become. I've been to every single Fluent conference, and this year is unquestionably broader than any before it.

It takes a lot of different disciplines and focuses to encompass what it fully means to build a better web. In the past, I've felt Fluent Conference only tackled the most buzzwordy topics, but others were a bit underserved. But this year, the committee very intentionally expanded our reach of content to be more intentional about several of these topics we feel are really becoming fundamental to the foundation of the web. We always had a talk here or there about security or performance, but those topics were never the headlines.

Now that Fluent and Velocity are combined, it gives us a fresh chance to really bring those important issues more to the forefront. And we were blown away by how many great talk submissions we had on those topics. Some of the talks I'm most interested in this year are from these areas, and that is very exciting.

At the same time, one of the most fascinating things to me is how you can see a thread running through most of the talks on the schedule about the web maturing and growing up. It's no longer just a toy experimentation ground. The web is the most transformative platform for people to connect and express themselves in human history, and I find it profound and exciting to see how each of the different constitutent technologies that make up the web have all matured in their own ways.

One area that's always captured my imagination, but I've never had time to learn at all, is robotics and distributed hardware. Even a few years ago, it would be hard to make the case that these things really need to be talked about at a web conference. But now we're delighted to have several talks on these topics, because the line between web and devices has been almost erased. I personally can't wait for the chance to write some JS and control the lights in my home office from my phone, tablet, or TV!

LABjs was my first official open-source project that went anywhere. I was extremely fortunate that it got a lot of positive attention and was used for performance-optimized loading of scripts on the web by many major sites. It was stable and unchanged for many years, but recently I started working on a complete rewrite to bring the library up to date with the latest web platform technologies.

What most people don't know is where LABjs came from. I was one of the early helpers that participated in founding the first JS meetup in my hometown of Austin, TX. Myself and the other organizer, Joe, basically spent the first 12+ months carrying most of the speaking responsibilities for each monthly meeting, while we tried to attract attendees and speakers.

Each month, about a week before the meeting, we'd chat and hash out who was talking and what about. For my part, that usually involved taking a project or experiment of my own and turning it into a talk. For the June (of 2009!) meeting, I decided to show off an experiment in dynamically loading JS, something I'd just been toying around with at work.

So that week, I wrote the beginnings of the LABjs library so I could present it to the meetup. The reception was great, and it was clear very soon after that I needed to make it into a real thing that the broader community could utilize. 8 years later, and having been in use on 10's of thousands of sites with countless millions of pages viewed, and it all started from a little experiment-hack for a fledgling local JS meetup.

I don't share this story to toot my own horn. It's a real but overlooked part of my origin story -- one of the keys things that led to me becoming active in the community, as an OSS developer and as a speaker, and eventually author and teacher. I share this tidbit because I hope and believe that someone reading this can and will do exactly the same thing. Take an idea or experiment, build it into something you can share at a meetup or in a blog post, and watch where it takes you!

What advice would you give to new web developers that are heading to their first conference?

Don't try to plan everything out, because one of the best parts of the conference experience is floating around and figuring out which talks to go to as you go along. Maybe you'll meet some other attendees and end up going together in a group. And don't just go to talks that are in your normal wheelhouse. Go to some talks that are far outside your comfort zone. This is the best time to explore!

Above all, make sure you take time to connect with people. The conference can sometimes feel like it's all about broadcasting content -- and believe me, the talk content is great! -- but what's unique about a conference versus just watching videos online is that you get to interact with people. That's my favorite part. We call it the "hallway track", where some of the most vibrant and useful conversations happen ad hoc out in the hallway or in a lounge. Make sure you connect with people as much as you can, that's where you'll get the most out of the conference experience.

5. You and I tend to focus on JavaScript but CSS is advancing too, most notably with CSS grid. What else can web designers learn about at Fluent?

I am clearly biased towards JS! But, Fluent is about the web, and JS is only a part of that bigger story. We have tons of great content about technologies besides JS.

I know there's a tendency for folks in our industry to self-select as "I'm a designer" or "I'm a developer", and then at conference especially, try to only flock with birds of the same feather. We see this divide play out in small and big ways within the community. There are some who believe JS is superior and that it should drive (and in some cases, replace) other parts of the platform like CSS. Others believe "if it can be done in CSS it should be" and "JS should be used as a last resort".

Neither of these positions is healthy, and neither of them is even accurate enough to be useful.

6. Networking is a huge benefit to going to conferences but some new developers may be too shy to join conversations or introduce themselves. What tips can you give for conference networking?

First, no matter how inexperienced or awkward you feel, remind yourself that almost every other person around you at this conference is feeling exactly the same way. You'll feel like you're the only amateur among seasoned pros, but the fact is that most attendees are in the same boat as you -- and they're just as intimidated and impostor-feeling as you!

So, just say hi and go from there. And here's a favorite tip of mine when meeting someone: don't ask "what do you do? " That question is so limiting and contributes to self-selection and barriers. Instead, ask "what are you excited about these days?" That's an open ended question, and odds are it will bring about the most interesting conversations you'll have at the whole conference.

Every person you meet, repeat their name a couple of times in your conversation with them. Make a mental note about the stuff their interested in. And then look for them again later at the conference and repeat their name back and ask more about the stuff they're into. Just that one little action is like 95% of what it takes to effectively network at these conferences. Despite the thousand+ people around you, and vendors and talks and all that noise, the real value is in those 1-on-1 interactions.

Last question: which talks are you most looking forward to?

Geeking out as a developer and a recent convert to functional programming concepts, one of the talks I'm most looking forward to is "Immutable data structures for functional JavaScript" by Anjana Vakil. The performance side of our web is well represented this year, especially by talks like Yoav Weiss's "Caches All The Way Down". But I'll probably learn the most from "Building a style guide with efficiency, accessibility, and performance built in" by Archana Sankaranarayanan.