When writing JavaScript, I spend a lot of time fixing basic mistakes. I often rename a variable and test my app, and then find I didn’t rename the variable in one spot. I rename functions, same thing. I type things wrong, and again waste time clicking around in the browser.

The feeling is always the same – Why did I make this mistake again? I’ve been programming for over 15 years, and I still keep doing this.

This is why I love ESLint. It’s like programming together with someone else who pays better attention to this than I do. “Hey, you forgot to rename that”. “Hey, you shouldn’t do that”.

ESLint is a tool that analyses your code and points out any issues it finds. It can find bugs, potential problem areas, poor coding styles and stylistic issues. Best of all it’s highly configurable, so if you don’t agree with it on something, you can tell it to shut up about it.

Let me show you a real-life example of how using ESLint will benefit you.

Before going further, we must install ESLint. As with most JS tools today, you need nodejs to do so. Once you have it set up, run…

This will make the program eslint available from command line.

To explain ESLint’s benefits, I’ll show you a real-life example from a codebase I worked on. We’ll go through the code, and we can look at what ESLint does with it to make our lives easier.

The example JavaScript file is shown below. Don’t worry about the use of AngularJS in it – you will be able to use these techniques with any library or framework.

This is a basic component for uploading files. The code is functional, but let’s see what happens when we let ESLint have a go at it.

A typical starting point with ESLint is to first analyse your code with it and look at the output. Below is the ESLint output for the example module. 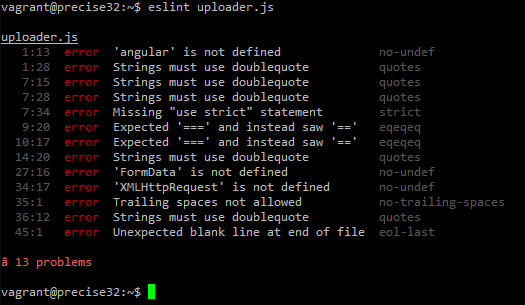 At this point, the output contains errors that shouldn’t be there, such as Angular is not defined, and XMLHttpRequest is not defined.

To do that, we’ll create a configuration file called .eslintrc, which we can use to tell ESLint what to do. Below you’ll see our first version of the .eslintrc file.

ESLint can be configured using JSON. Here, we are telling it that the environment is browser. The browser environment stops ESLint from giving errors about things like XMLHttpRequest or window. If you wanted to run this in NodeJS, you would include "node": 1 in addition, which does the same except for Node-builtins.

Let’s re-run eslint and find out what it says now. 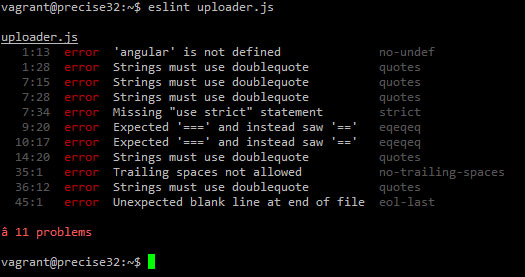 The errors about the browser environment are gone, but there’s another that we don’t want: . In a typical application, we would include libraries like Angular as script tags, which makes it available globally. To tell ESLint about this, we need some additional options in configuration file:

The globals field configures global variables. In this case, we define angular, but if you’re using jQuery or Backbone or Underscore or anything else, you can add $ or Backbone or _ in the same way.

Re-run eslint, and the error is gone. 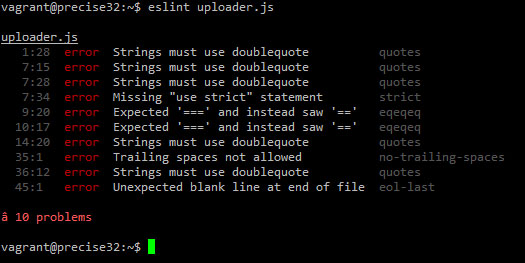 There’s still some things I want to change. I prefer using single-quotes for strings, so I’m going to add a rule to fix that.

The rules property configures ESLint’s rules. The quotes rule defines if ESLint gives an error for quote style, and which style is allowed. The number 2 makes it an error. Setting it to 1 would make it a warning, which appears differently in the output. "single" tells ESLint I want to allow single quotes only.

The codebase for this example doesn’t use strict mode or require triple-equals, so I’ll add those rules in as well.

In order to know which rule to configure, you can look at the output. 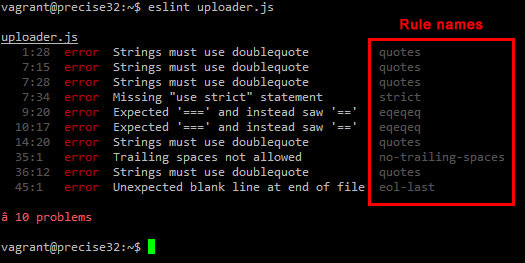 From this we can see for “use strict” the rule is “strict”, and for === the rule is “eqeqeq”. We can add those two into the configuration:

Setting a rule to 0 makes ESLint ignore it.

The remaining errors are easy to fix. We’ll remove the trailing spaces from line 35 and remove the blank line from the end of file.

Remember I said I often rename a variable and then forget to rename it everywhere? Let’s see how ESLint deals with that. I’ll rename xhr into request…

Did you notice a bug at a glance? I left in two cases of xhr. Let’s see what happens when we run ESLint.

ESLint points out two undefined variables, which in this case are caused by the rename. Now we can now spot this easily without spending time clicking around in the browser.

We can also throw in a syntax error just for fun:

These are just two examples of what ESLint can catch. The list of built-in rules is very long, and you can even write custom rules or install plugins.

ESLint can be a very valuable tool, but like any tool, you need to use it to get the benefits.

My five recommendations for you to get most out of ESLint are:

ESLint gives us a basic safety-net. It will catch many easy to make mistakes, and it’s very helpful when working in teams to enforce a coding style. But for a tighter safety-net, you should invest in unit tests. That, however, is a topic for another time. 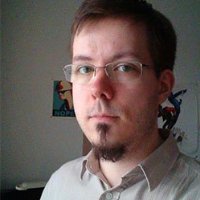 Jani Hartikainen has spent over 10 years building web applications. His clients include companies like Nokia and hot super secret startups. When not programming or playing games, Jani writes about JavaScript and high quality code on his site.