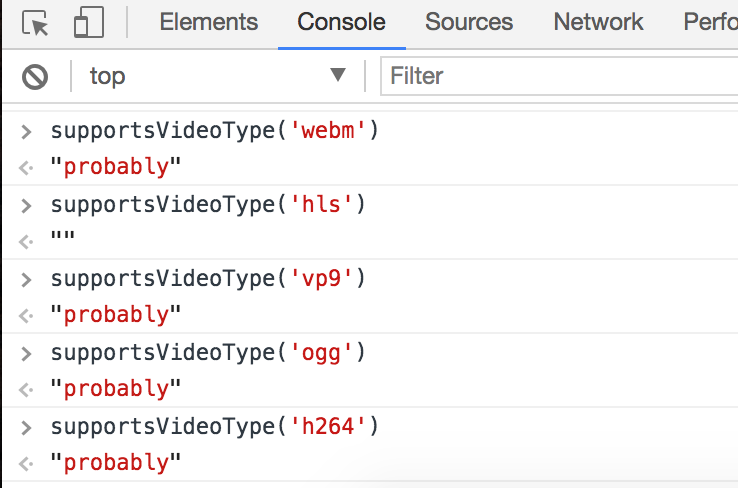 Over the past few years we've been seeing new audio, video, and image formats take shape to challenge the legacy formats that we've used since the web's inception.  This is a great development as we have more processing power and better compression algorithms have been developed, leading to faster load times and rendering.  Hooray for speed! The problem:  as with every other features added to the browser, some browsers get media format support faster than others, and some browsers refuse to support given formats.  Simply put:  we now need to do feature detection on media, something we've not traditionally had to do.  A while back I posted about how you can detect WEBP support in the browser and now I'd like to show you how to detect supported video formats -- it's easier than you think!

canPlayType is the secret to detecting video format support in the browser.  To use this method you must first create a <video> element instance: You then call canPlayType, passing in the format's MIME type and additional details as needed: There are three possible results from canPlayType:

Modernizr includes a small function to detect video format support; I've taken a moment to take that logic and create my own function for general purpose use without Modernizr: I use feature detection function efficiency to only create one element and simply return the result if called more than once.  Using this function today, Chrome reports the following:

The canPlayType method allowed you to feature detect the best compression and supported formats and server them to your users, thus making the most of your browser capabilities.  Get aggressive with your media formats to make your site as quick as possible!