Front-end developing is beautiful, and it's getting prettier by the day. Nowadays we got so many concepts, methodologies, good practices and whatnot to make our work stand out from the rest. Javascript (along with its countless third party libraries) and CSS have grown so big, helping us create things that even a couple of years ago were deemed impossible. But there's one thing that's often left in the dark, I'm sure you've stumbled with it at least once, and we know its fix is not always very good looking: vertically centering elements.

Now, there are many ways of addressing this issue: the table method, the height and half height method, the inserting-another-element-slash-pseudo-element-with-vertical-align-and-height-100% method, the calculate on load method, and more. Each of these seems dirtier than the last, it gets even more complicated when the element's height is unknown (be it a parent's or children's), and don't get me started on how bad it looks like when working with responsive layouts. 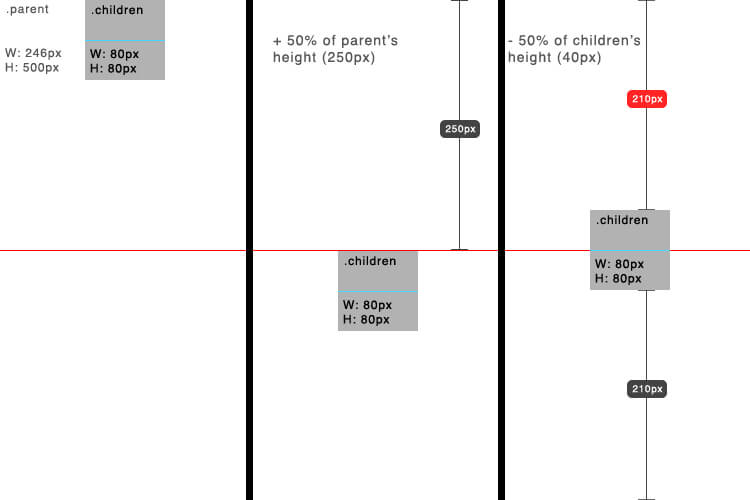 And I know what you are thinking, "Inlining CSS is bad!!!", but this was the least ugly solution. It didn't require to change any element's box model, waste its pseudo-elements, insert another element just for the sake of a fix, nor any other hackery. But as I said before, things got trickier when the element's dimensions were unknown.

Sure, you could get over this by using a script that runs after the window has loaded, or on window/object resize, and then recalculate the positions. But what if you've got hundreds of elements, each getting resized to fit their parents frames? The script will take a huge performance hit. And more importantly, why complicate things so much when there's a simple, pure CSS solution?

Our example will be base on the following HTML:

This is a frequent case: a parent with children we desire to be vertically centered.

One interesting thing about CSS transforms is that, when applying them with percentage values, they base that value on the dimensions of the element which they are being implemented on, as opposed to properties like top, right, bottom, left, margin, and padding, which only use the parent's dimensions (or in case of absolute positioning, which uses its closest relative parent).

Knowing this, we could apply the same "calculate on load" method's small equation, but now adapting it to just CSS. First, we move the element in question down to the middle of it's parent using top: 50%, then we pull it back up by half of said element, with transform: translateY(-50%). Of course, the element must be relative, absolute, or fixed. If we look back to Figure 1, this is exactly what we have achieved.

As we are using percentages, these elements will be vertically centered no matter how tall their parents are, or what unknown and random changes they experiment while the user interacts with them.

Finally, a few warnings: If you want to centralice a relative positioned element, its parent must have a height value, i.e., it won't work if said parent's height is set to auto. And of course, as most CSS3 features and properties, transforms don't work in IE 8 and earlier versions. 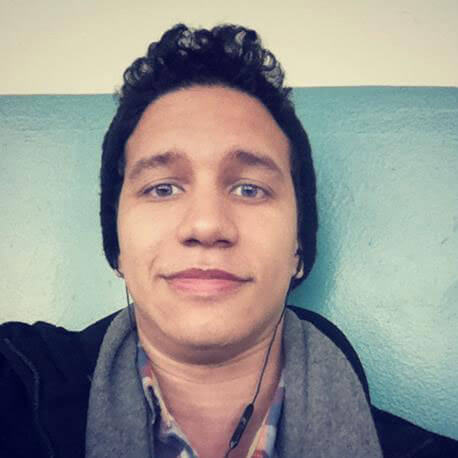 Front-end developer and designer originated from a small and proud island in the Caribbean, Dominican Republic, who recently moved to the US in search of broadening it’s horizons as a web developer, push his career to new heights, and hopefully meet and work with great, passionate developers and designers along the way. Currently a freelancer, started designing and mocking up websites in early 2011 while still in college, but later discovered that making design come to life, and creating great experiences for the end user was even more gratifying, so soon after he was building full, interactive sites along a small team of colleagues. Since then, has helped build and lead several web projects from the ground up, exceeding the client’s expectations on each of them, and delivering best in class user experience. His interests include working on big and challenging projects, listening to loud, fast paced music, and eating inconsiderable amounts of asian food.