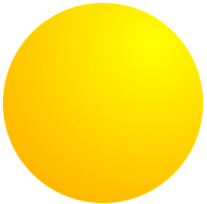 A while back I shared a clever technique for creating triangles with only CSS. Over the past year, I've found CSS triangles incredibly effective, especially when looking to create tooltips or design elements with a likewise pointer pattern. There's another common shape that's easy to create, and that is the circle. Using border-radius, you can create wonderful CSS circles.

Setting the border-radius of each side of an element to 50% will create the circle display at any size:

It's really that simple...but I can't let this post go without touching on CSS gradients and basic spin animation:

CSS circles don't immediately appear as useful as CSS triangles, but they surely have value within design. An animated set of circles could act as a loading animation; creative use of the circle is up to you. Can you think of a good CSS circle usage? Share!