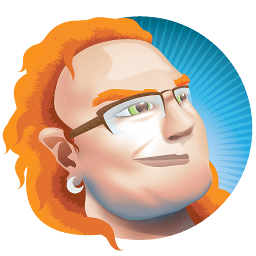 Mozilla's Christian Heilmann is an evangelist that knows how to walk the walk as well as talk the talk.  You'll often see him creating sweet demos on his blog or the awesome Mozilla Hacks blog.  One of my favorite pieces from Christian isn't a demo but the 3D sidebar effect he users on his blog.  I took a moment to dissect the sidebar so I could show you how he does it!

It turns out Christian already wrote this post. Check his out when you get a moment!

There are two elements involved in the sidebar effect:

The parent element is used only for CSS perspective, which you will see below.

The degree to which you rotate the sidebar is up to you but be sure not to over-rotate or you could be confusing users.

I think Chris' unique sidebar adds a touch of elegance to his site.  It's a shining example of doing something special without going overboard.  While you check out Christian's site to see his sidebar in action, take a few moments to read his posts -- you'll quickly see why he's a class act in our industry.