Despite what many developers believe, CSS-based animation is not the only performant way to animate on the web. There's also JavaScript—and JS has some incredible advantages.

By abandoning JavaScript for CSS, like many developers do, we are bloating our stylesheets, sacrificing animation timing control, and forgoing physics-based motion.

Don't get me wrong. CSS animations play an important role on the web -- both in isolation and in combination with JavaScript animations. In particular, CSS is perfect for simple animations pertaining to basic user interactions, such as hover and focus states.

JavaScript, however, is usually the better option for almost everything else since it's much more versatile.

You might not believe me that JavaScript animations are as fast as CSS animations. You've probably tried animating with jQuery and had your animations jitter and jump, and assumed it was a problem inherent to JavaScript as a language.

It's not. Don't confuse the two, JavaScript and jQuery are separate beasts.

jQuery is a library consisting of functions that essentially layer on top of plain JavaScript. jQuery wasn't designed to be a high-performance animation engine. Instead, it was designed to ease the headaches of DOM manipulation—a job it does amazingly well.

Luckily, there are open-source animation libraries that allow you to bypass jQuery to harness more of the raw power of plain JS. With these animation libraries, you can establish a manageable animation workflow and layer on features that drastically improve the motion design on your sites.

I'm going to get you up to speed with the Velocity.js JavaScript animation engine so that your site's animations can be punchy, smooth, and easy to implement.

Velocity is a dedicated animation library. It's simple to use, it's incredibly powerful, it's widely adopted by major companies (including Tumblr, Microsoft and WhatsApp), and it's free under the MIT license.

Velocity mimics the syntax of jQuery—and combines perfectly with it (although it can be used without jQuery as well), so learning it should be no problem for you. Because of jQuery's ubiquity, I'll be showing you Velocity as it's used in combination with jQuery.

Note: For a quick 80/20 of speeding up all your animations, you could simply replace all your current jQuery "animate()" function calls with "velocity()" function calls, since Velocity mirrors the syntax and the basic functionality of jQuery's animate function (while expanding on it). Even with just that quick change, your site can receive a significant performance boost.

But there's also so much more to learn with Velocity. Before we dive into how to specifically use Velocity, let's quickly learn what's possible with it so that you can grasp its value.

Below are the things you can do with JavaScript animation that simply cannot be achieved with CSS-based animation.

A recent trend in web design is to have long, single-page sites where links cause the page to smoothly scroll down to the appropriate page section, rather than navigate to a different page entirely. This is one of the most popular uses for JS animations, as CSS cannot perform scrolling.

In Velocity, you simply run the velocity function with the scroll command on the element you wish to scroll to:

This function causes the browser to scroll down to the selected element (jQuery object, $element) using a duration of 1000ms. With jQuery alone, this would be a much more complicated, multi-line function.

Don't let this code overwhelm you if you don't understand what it means; we're going to walk through it slowly after we run through a couple more neat features.

In jQuery, to revert back to the original state before the animation started, you have to manually animate the properties back to their original values. For example:

In contrast, with Velocity, it's a simple matter of running the reverse command:

This will reverse the animation to the selected element's original state prior to the animation—no need to specify the values manually.

Real world motion is neither linear, nor is it smooth. It has fast parts, slow parts, friction, and even the concept of weight. With JavaScript based animations, you can mimic real-world physics in your animations, making things seem more natural. Linear motion looks robotic (lifeless) and slightly uncomfortable to watch.

The example above would be very fast and bouncy (high tension), but would decelerate quickly and be slow near the end of the animation (high friction)

Okay great, so how do I use it?

Enough of hearing about what it can do, let's find out how you can start using it today. As I mentioned earlier, Velocity can be used independently, but combining it with jQuery leads to the quickest results, as jQuery makes selecting elements far easier.

The first step is to download Velocity.js from here. Then include it in your HTML file in a script tag before the closing body tag of your page. For example:

Note: If you're using jQuery, make sure to include jQuery before Velocity, as Velocity will adapt its API based on whether jQuery is present.

Once included, you can basically start using it in place of jQuery's "animate" function. However, there's several additions that make Velocity much more powerful than that, such as animation reversals, transforms, spring physics, chaining, and color animations (all of which I'll be covering here). But it doesn't end there, check out the Velocity docs for more info.

Let's learn how to actually use Velocity's syntax!

Velocity accepts one or more arguments. The first argument is the only mandatory argument. It can either be the name of a command (as in the example for "scroll" above), or it can be a data object that maps CSS properties to the animation's final values.

The second argument is a data object of animation options, such as duration, easing, delay, and complete (callback function that executes after the animation completes).

Alternatively, as a shortcut, you can pass comma-separated values for the duration, easing, and complete function in any order. If, however, you wish to have an additional option, such as delay, you must instead use a data object, and only a data object—you can't mix and match.

Note: The second argument is optional because there are default values for the most important properties: duration: 400ms, and easing: "swing". All the other animation options are optional.

Also note that you can only pass in a single numeric value per CSS property, so padding: "10px 15px" will not work. Instead, you must set each one separately: { paddingLeft: "10px", paddingTop: "15px" … }. Not only is it more legible and explicit, it also means you can specify easing types for each sub-property, rather than having one global easing type, giving you unparalleled customization of your animations.

Note: CSS properties with multiple words (font-size and padding-left) must be written in camelcase (fontSize and paddingLeft), not hyphenated.

Property values:If a unit type is not provided, one is assumed (ms, px, and deg are generally assumed), but being explicit is better so you can discern the unit types at a glance when reading back through your code. If there's anything other than a numerical value, then quotes must be used. For example, duration: 500; would be allowed, but duration: 500px; would not, quotations would have to be used around 500px.

JavaScript animation also allows for four value operators to be used: value operators +, -, *, and /, allowing you to add, subtract, multiply, and divide from the current value of the property:

Chaining Velocity calls one after another on the same element queues the animations to execute one after the other:

This would cause the element to animate to a width of 500px and height of 300px, and after completing that animation, it would fade to an opacity of 0%. As mentioned previously, this allows you to make complex, multi-stage animations with timing guaranteed to happen exactly as planned—one after another—without any manual calculations.

I've mentioned the word easing a few times in this article, and maybe you're wondering what that means. Easing's are mathematical functions that determine the speed of the animation at different stages throughout its duration. For example, an "ease-in-out" easing gradually accelerates at the beginning of the animation, and gradually decelerates near the end of the animation. A "linear" easing has a constant speed throughout the duration, and looks very jarring and robotic.

You specify easing with the easing option:

Easing is also how you use spring physics as mentioned previously. You can either use the default values (tension of 500, friction of 20) by passing a value of "spring," or you can specify them manually:

Velocity allows color animations for the following CSS properties: color, backgroundColor, borderColor, and outlineColor. These color properties only accept hex strings as inputs (#000000 for black, #3b5998 for Facebook blue). You can however tweak the individual red, green, blue values (0 to 255), and even its opacity with the alpha value (0 to 1). Simply append the color CSS properties' names with "Red," "Green," "Blue," or "Alpha."

As mentioned earlier, the scroll command causes the page to scroll to the top edge of the an element. You can pass in the same options as the other animations, as well as chain with other animation calls.

By default, page scrolling occurs on the y-axis. To change to horizontal scrolling, use the axis option:

A common effect is to have a offset from the top edge when scrolling, so the content isn't at the very top of the browser and hard to read. To achieve this, or the opposite effect in Velocity, use the offset option:

Want to combine the power of CSS animations and JS animations? Layer in some CSS transforms, allowing you to do 2D and 3D visual manipulations like translation, scaling, and rotation. Note that these do not affect the element's location in the site, nor the locations of elements around it.

Animations breathe life and interactivity into an otherwise static page, and JavaScript-based animations are the best way to add them.

With CSS animations, you're limited in functionality to the infrequent updates of the CSS standard. With JavaScript, there are dozens of new libraries, plugins, and updates being added to the open-source world every single day—expanding the possibilities of your animations through the use of new tools.

Velocity has more features than those demonstrated here, and I encourage you to check out its documentation. Now go experiment! :) 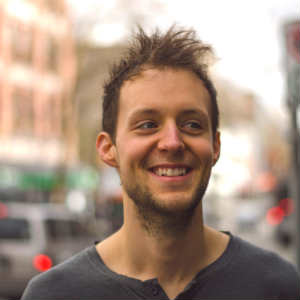 Neal O’Grady (@NealOGrady) is an Irish-Canadian freelance web developer, designer, and writer. He’s written on design topics for the Webflow blog, and on random thoughts on his personal blog. He’s working on his sixth language, and is bouncing around the world—he’s currently in Europe.