Popular:
Create a Google+ Mac App for Your Dock
Building Resilient Systems on AWS: Learn how to design and implement a resilient, highly available, fault-tolerant infrastructure on AWS.

Create a Google+ Mac App for Your Dock

This technique would allow you to create an app for any website, but the focus of this post will be Google+.  You could use Fluid.app for this, but the technique presented here allows for avoid Fluid.app.

Download the following Google+ logo to the Downloads directory of your computer:

This logo will be used as the application and dock logo.

There's an outstanding script available on LifeHacker which provides the user a trio of simple prompts and creates an app based on the input.  Behind the scenes, makeapp.sh copies Google's Chrome and creates separate settings paths (for cookie and history separation).  With those created, an executable is created which opens the Chrome copy to the Google+ url.

Run the script from command line with:

The script will ask you for three arguments;  provide the following: 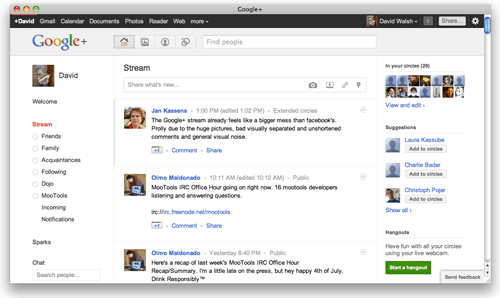 Now open your applications folder and you'll see a new app called Google+!  Drag the app icon to the dock and now you have a Google+ app in your dock!  The separate history and cookie pool is important so that your traditional Chrome install doesn't muck with your Google+ app's information, and visa versa.  Have fun with Google+!